Just a quickie to acknowledge the fact that I'm a horrible blogger right now. Things have been so hectic that I haven't really even had time to get my exercise or knitting time in. Grump.

Patrick turned 18 last Friday. Nationals were great - they were 9th overall out of 19 qualifying boats. Pretty good considering this is only his second year rowing. The kids also went to Kings Island while they were back there. I take it that it is a pretty awesome amusement park from the sound of things.

So I'm off to Patrick's high school graduation. I should have pictures to post tomorrow.

Knitting front - just finished Sivia Harding's Fantasy Diamond Scarf using Fleece Artist SeaWool. Very quick knit - started last Tuesday, blocked yesterday, up on the class sample board today. I'm hoping to teach this as a class in September. Other item on the needles, a jacket out of Debbie Bliss Astrakhan.

Gotta go get a good seat!
Posted by That's my middle name at 5:29 PM 3 comments: Links to this post

(So, I wrote this post over a week ago. I just hadn't hyperlinked my hyperlink. I do tend to procrastinate. hmmmmm)

Kim tagged me for a meme. Having never done one of these before, I'm a little bit nervous, but here goes!


1. I don't really like mushrooms. When I was a kid, I truly hated the slimy things because I was afraid that perhaps a mushroom picker person accidentally put a poisonous one in the bunch. I had the same fear for both canned and fresh mushrooms.


2. My favorite place to live would be Cannon Beach, Oregon. I love this place, I love the beach. My grandparents bought a place there in the late 50's and my dad's side of the family(my dad, uncle, aunt, my brother and I) owned it until about 6 years ago. We would go every summer for a week or so at a time, and often multiple times throughout the year. I often think it would be wonderful to eventually retire there someday.


3. I was extremely shy until I was 30 years old. At that point I had been asked to be on the board for a moms group I attended and I almost said no. But, I decided that I had enough of the shy routine, and decided that was something major I could change about myself. I still can be pretty quiet in a group, but I can also hold my own for the most part.


4. I wanted to be a math teacher when I was growing up. I was very good at math (and spelling!) and felt like that would be so fun. That is, until I got to 9th grade geometry. I took this class 3 times, and still couldn't pass it. The first two tries I had the same teacher. She and I didn't click (see above, I was shy and was very intimidated by her!) Third time, I don't know went wrong. I am still very quick at figuring things out, but have never gotten over my hatred of geometry. I then set my career goal towards music.

5. I didn't end up with a career in music (duh! I work in a yarn shop) I did take every music class that I could in high school and college. Our high school music teacher, Tom Reich, even came up with a special music class for those 5 of us that actually had some promise in this field. I do remember working on re-arranging music, don't remember much else except for that one of the main guys in the band, Queensryche (Eddie something or other) was also in this group. Maybe this was his grand start! Yeah, probably not.

6. When I was a kid, I used to dream that the Brady Bunch and/or Partridge Family was my own. I too sung on stage with Keith and Laurie and shook that tambourine. Or, I would drive around LA in a convertible with the whole Brady Bunch.

7. I am needle phobic. I get nauseous when they give injections on television. My mom tells of me having to be held down by a doctor and a nurse to get booster shots. I don't remember this. However, wouldn't you know, I'm ended up having to have bothof my kids by C-section. I'm the one they say "oops, I never have this much trouble" when it's time for an IV or blood test. I pretty much can handle it now, but I have to pinch my hand or something to hurt myself somewhere else on my body to take away the feeling of the needle. I think alot of it is trust, similar to the mushrooms. What if they have something sinister in mind? Keeping this all in mind, when I was trying to figure out a career/job/what I wanted to be, I really wanted to be a dental hygienist. The thing that held me back was that I was going to have to give patients injections, and that in school we would be practicing on each other. No way. I did dental assisting instead. I do love medical shows - Trauma, Life in the ER and certain things about House and I have a certificate in Medical Transcription. Just don't show a close-up of needle please!

Okay so now who should I tag? I think Naomi, and the first other six people who want to play along! (I don't know many who haven't done this yet, and those that I was planning to tag got tagged by our store blog. poo.)

Rules of the game: Each person tagged gives 7 random facts about themselves. Those tagged need to write on their blogs 7 facts, as well as the rules of the game. You need to tag seven others and list their names on your blog. You have to leave those you plan on tagging a note in their comments so they know that they have been tagged and need to read your blog.
Posted by That's my middle name at 11:27 PM 2 comments: Links to this post

Hey there, hi there, ho there! Busy busy around chez Gowey these days. Between work and the training schedule for the 3-day walk, there isn't much extra time. I visited my new podiatrist last week, and he said when people train as much as I am, it's really just like a part time job. I heartily agree! Tomorrow, I will be doing another 10-mile trek and I figure it will take me around 3 hours. Whew! I am getting in shape, and I have the motivation, which for me is one of the hardest things.
Doug and I won't be going to Ohio after all - Patrick doesn't want us to go because of the money mostly, so we hope we can do something fun as a family instead. He leaves next Wednesday night (last day of finals for him, yeah!) and comes back late Monday. Hops on another plane sometime around noon or so on Tuesday, because he is supposed to be in Spokane to work on building houses for Habitat for Humanity all week for school. The school he goes to is called a "choice" school in our district - 7-12th grade, parents put in 30 hours minimum per year, and the students basically have 6 core subjects they work on for those 6 years - Humanities, International Studies, Art, Spanish, Science and Math. It's a very small school, but public - 360 students. His graduating class is around 55 kids, Sara had 32 in hers. One week a year, the teachers plan week-long outings for the kids, they sign up and off they go. Sara went to Greece and Italy one year, but for the most part, our kids pick the ones that aren't quite so pricey.

Why the reference to midnight in the title of this post?? Well, besides knitting I also do other crafty-like things. One of this is mosaics. About two years ago, I picked up this cabinet at a second hand store: 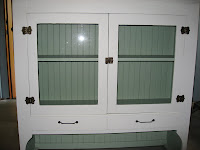 This is basically what the structure of the cabinet looks like - of course it wasn't all cute and painted, it was basically a wreck! It had been a high kitchen cabinet that I assume was attached to the ceiling. I painted the inside of the cabinet and drawers green, and then the outside sort of a softened white. The best part of all is what has taken so long - mosaic! 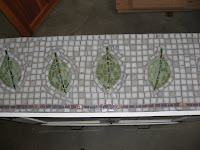 I can't get the whole top in this picture, but I did mosaic tiles on the top, using hydrangea leaves as a template. (There are five leaves total - there is one more to the right in this picture) Then there is a purple and copper border along the two side edges and the front. I think it's quite pretty! So why midnight? Because I put the sealer on at 4 pm, and it will be dry and ready to move into our dining room then! Well, we will wait until tomorrow, but I am so relieved to be done with this project! Off to crate and barrel soon to get some cool glassware.....

On the knitting front - I've done these and these: 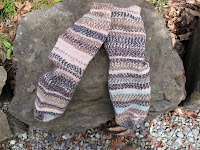 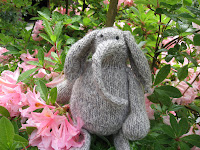 Finished the lifestyle socks (not sure I like the non-matchyness) and an elephant from the Knitting @Knoon pattern. Currently working on (Naomi will love this) Pomatomus socks from knitty.com, in yes, Fleece Artist. Naomi and I laugh because we very often pick the same patterns - she is currently on vacation in Bonaire, and started these socks. I had no idea she was even considering them, and I know she didn't know I was starting them. Too funny.
If you aren't doing anything tomorrow night, VYT is hosting a Dulaan-a-Than from 6 pm to 6 am. Find out more here. I think I'll go for a bit, but I do have a family extravaganza all day and then work all day Sunday. I'm thinking show up when I can, and leave around midnight or so.


I hope to post more regularly - have a great weekend!
Posted by That's my middle name at 7:40 PM 4 comments: Links to this post