No, not Disneyland, but Cincinnati! I don't think I've mentioned this before, but our son, Patrick is an avid rower. The NW Junior Regionals were held in Vancouver, WA this past weekend, and his Lightweight 8 (varsity)boat qualified for nationals. He is also the stroke for the Varsity Lightweight 4, but they cancelled the race due to weather so I think it's wait and see if that boat qualifies. We haven't made our reservations yet, but I really think we will go to watch the races. I've never been to Cincinnati before (actually it's Batavia, OH) are there any sites we should be sure to not miss? Granted most of our time will be spent at the lake watching various races, but still, I'm sure there will be some downtime.

As for the knitting front, I'm busy reorganizing my stash and trying to finish some projects this morning before I head off to work. Has anyone made the Noni Adventure bags? I'm having a hard time trying to find the 16" zipper with a double pull and plastic teeth that they recommend. I emailed the designer about the purse rings they show in the picture, the silver ones only retail for $100! Wow - I think I'll stick with the $4.99 ones I found at Pacific Fabrics thank you very much.
Posted by That's my middle name at 11:38 AM 2 comments: Links to this post 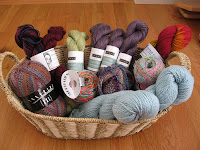 We had so much fun yesterday. Each shop in the LYS tour had a free one skein pattern, and the yarn for that pattern was 10% off. We started by meeting at my house and hopped on 405 South towards Kent. First stop - Renaissance Yarns. They had Duet Sock yarn in DK weight. So many colors to choose from! I ended up with a burgundy, black and blue colorway called Midnight Sky. I kept going back and changing my mind on the colorway, but in the end I really like this one. I did also purchase some Blue Sky Organic Cotton in a really pretty teal-ish light blue.

The next shop on our quest was the Knittery in Renton. This shop has been around for over 40 years. Their pattern was for cabled fingerless gloves, with novelty yarn at the cuff. I did take the pattern, couldn't figure out what the yarn was that they used, but I didn't feel I needed this. Working in a yarn shop, I have to say no sometimes! I did pick up a ball of Trekking in color 101 however....

Next stop - The Yarn Stash in Burien. Cute shop and fairly good stash of sock yarn. I bought some Tofutsies there, color #2173. I've been wanting to try this yarn out - wool, soy cotton and chitin (crab and shrimp shells) blend. It looks pretty splitty, but we'll see. The free pattern here was for what they called a rice roll - basically a tube lined with muslin and then you can fill it with rice. The cool thing (okay, I fell for it) was that it uses the scented meditation yarn from skacel. I chose lavender. If I decide I don't like it, I know my mom would enjoy the novelty of it for her birthday!

Fourth stop on the tour was to head over to West Seattle and visit Seattle Yarn Gallery. The pattern there was for a small entrelac bag using Noro Tidiori. Oh of course I caved on this one too! I bought colorway #5. I haven't done entrelac anyway, and I wanted something small so, what the heck.

By this time it was after 12, so we thought we'd hurry on to the ferry to Bainbridge Island and Churchmouse. Our original plan was lunch, Churchmouse and then Mora ice cream. We quickly realized that since we couldn't drive on water, we'd never make that ferry, so we stopped at Alki Baking Company for some lunch to go and then off to the ferry lines.

While in line for the ferry, we had our lunch (yum!) and the trunk of Naomi's car looked like this: 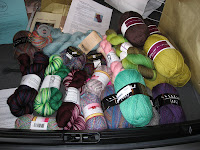 Here's a shot of the ferry lines too: 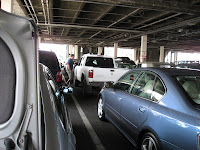 Off we went on the ferry for our Bainbridge adventure. Churchmouse Yarn and Tea is just such a cute, fun shop. Of course, they carry STR which is awesomely stupendous (not like I'm in this year's sock club or anything). I did buy one skein of STR lightweight in Farmhouse for me, and picked up a skein of Puck's Mischief for Brad at work. Their one-skein pattern was for a tea cozy, using STR in heavyweight. I decided I really don't need a tea cozy so passed on that one. I did pick up a skein of Louet Euroflax in light green for I think a washcloth and 3 skeins of the light purple to make a summer shell. It was nice talking to Kit and John (the owners) too - they are so nice, and remembered who I was from our shop. Kit had on the cutest sweater - Now I'm on a quest to find the rowan design book 2 so I can make it.

So Much Yarn was next - by that time we were fading fast. Lauren has a really cute shop, and it was nice to see her again. She has a shop dog who was busy snoozing behind the counter. Shop pattern(s) were a seed stitch wrap and/or a baby sweater.

Village Yarn and Tea (where I work!)was our last stop - We thought we'd stop in for some tea and Naomi was going to pick up a skein of Suri Blue while she could still get some. There were only four skeins left - I'm guessing people liked it! There was a person there who is blogging about knitting for the Seattle PI - she took a picture of me with my wrap (I called it the touring wrap, because of the LYS tour). Here's a link to her post.

So we all had fun. I decided that I wasn't going to visit more shops today though. I wanted to go to weaving works for a few things, but I think I'll go later this week. I am working 10-6 tomorrow for the tour, so I felt I really needed to get some things done around the house - one of them being to somehow get my stash in order. So off to finish that - hopefully I'll be done with that tonight.

Happy knitting!
Posted by That's my middle name at 6:47 PM 4 comments: Links to this post

So what, pray tell, might this new yarn be? (see previous post) For the LYS tour, we have a brand new Fleece Artist yarn - Suri Blue. It's a 50% suri alpaca, 50% blue face leicester blend in laceweight and 660 yards. I came up with a wrap pattern for our shop pattern for the tour. Hopefully everyone will love it! 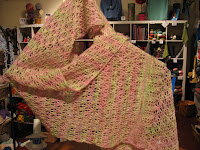 If VYT is on your list for the LYS tour, be sure and check out the new stitch markers Amy brought in last night. There's a picture of the VYT stitch markers on her blog. I had a fun picture of all the Suri Blue skeins lined up and ready to go, but my camera battery died. Rats.

I'm off for a day of LYS touring and ice cream eating with Amy and Naomi. Camera is charged, hopefully plenty will be documented. We are going to have a blast!

Obviously things have been busy around here, thus the lack of posting. This coming weekend in the greater Puget Sound region (Bellingham to Renton and Bainbridge Island to Bellevue) 20 yarn shops are participating in a LYS tour. This will be Friday, Saturday and Sunday, and hours are extended until 9 pm Fri and Sat, and 6 on Sun. Each shop has come up with a one skein pattern exclusive to the tour and the yarn for the pattern will be 10% off. Amy, Naomi and I are going to spend the day together going to the shops in the south part of the tour.

I wrote the pattern for what our shop is doing, and the yarn.... you won't believe the coolness of the yarn. I can't talk about it until Friday, but the pattern was written for the yarn, not the other way around. No one else has this yarn, so it's kind of fun being part of it.

So here's my plan. I'm going to buy one of these exclusive skeins that everyone will want (!) and offer it as a contest. As I've mentioned before, I'm training for the 3-day walk that takes place in Seattle Sept. 7-9. I need to raise $2200 to participate, so to kick that off, everyone that donates to my 3-day account up until Friday June 1st will be included in this drawing. Here is a link on how to get to the donation page: 3-day . Click on donate today, then Seattle, then search on Ellen Gowey. That's me! If you decided to donate, and donations are tax deductible, leave a comment so I know who is in the drawing. Go ahead and spread the word! It's a great cause.

Okay - time for yoga and weights, then work. Have an awesome day!
Posted by That's my middle name at 7:44 AM 3 comments: Links to this post

I've seen this list on a few blogs, I thought I'd do it too. Bold for stuff you've done, italics for stuff you plan to do one day, and normal for stuff you're not planning on doing.


I guess that's quite a bit. Try it for yourself - is there anything that you think is just beyond what you'd do? I personally think the dog/cat hair thing is gross, and I do have a cat. Hair accessories? Somethings are better left for the drugstore. Just my opinion though.
Posted by That's my middle name at 7:35 AM No comments: Links to this post

Yes, I'm still around, just short of time and now I have to leave for work in two minutes.

Here's a quick update -
- I finished a victorian shoulderette with handspun and beads. Picture soon.
- Patrick got into Washington State University. Wahoo! Yes, he will be attending. I will have a Cougar and a Husky.
- Superbusy with yard, and trying to get organized. (Never ending battle?)
- Still walking. Went to the podiatrist about my ankle last week. Turns out I have anterior tibial insertion tendinitis. Got excellent running shoes (Brooks) need to heat my ankle before walking and then ice after. But I do have the okay for the 3-day walk.
- I have signed up for the 3-day walk. More on this later. But, I do have an account if you would like to sponsor me. Go to 3-day. click donate, select Seattle as the site. When it asks for name, enter Ellen Gowey. Thank you so, so much.
- Busy with end of year PTA, graduation too.

Time to go - I so hope to write more soon!
Posted by That's my middle name at 2:29 PM No comments: Links to this post