Adrienne of Belly Button Knits! The actual number was 54 pairs of socks. Yes, I was actually quite shocked when I counted, because who goes around counting their sock yarn? I really thought it would be around 25 pairs or so. Oops.
There were actually two guesses of 53 pairs, so I had a virtual coin toss (who knew you could find this online?) and Adrienne won. Adrienne, please leave your mailing address for me at thatsmymiddlename(at)gmail(dot)com and I'll get the yarn out to you!
I'm trying to get one more little sweater/vest finished this month, but alas and alack not much progress on the aran. I forgot where I was again and I'm not finding alot of time for more intense knitting. It's much easier to just pick up a pair of socks and dash those off.
I'll do a more picture-y post tomorrow or Friday, but I've got to get ready for work now - have a great day and thanks for playing along!
Posted by That's my middle name at 8:39 AM 3 comments: Links to this post

ETA: The contest is closed - thanks for playing along!!


In honor of my one-year anniversary of blogging and my birthday (see 2/20), I'm having a blog contest with a cool prize...... the winner will receive enough Kauni yarn to make Ruth's really cute knit skirt*!! Oooo, Ahhhh. The colorway is EC - the black with variations of grey - it looks good on everyone, and I have it on good authority that Stephanie will be making the very same skirt in the same colorway. How do I know?? Well, not only has she already posted it on her blog (yes, that was me in the picture of the Kaunis) but we were in Ruth Sorensen's class all day on Friday at Madrona at the same table and chatted pretty much all day. I'm waffling between the grey/black and the denim. I just can't decide, and I really don't need two of the same skirt.

Okay, here's what you have to do. Below is a picture of all of my sock yarn. The question is this. How many pairs of socks can I make? There are a few duplicate balls/skeins, such as Louet Gems and some yarn from elann that needs one skein per sock. To clarify, I'm not asking how many balls/skeins there are, but how many pairs of socks (regular size 7 1/2 woman's foot) does this picture represent?? I also will not be making socks from the leftovers...... 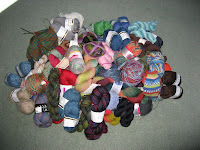 *The winner will need to buy the pattern from Ruth's website.

In other news, I'm still recovering from Madrona. I was talking to a coworker today to see how she was recovering, and I mentioned it was almost like recovering from an illness or surgery. I still feel walloped around 5 in the afternoon. I don't want to make this an extremely long post so I'll talk about Madrona 2008 next time.

Good luck guessing on the sock yarn - I'll close the contest on Wednesday and post a winner.

Have a great day!

Posted by That's my middle name at 5:26 PM 39 comments: Links to this post

Hi - just a quickie post without pictures to let you know I did survive Madrona. I have been wanting to post since I've been back but I hit the ground running and don't have pictures yet. If you are a student of mine, you've seen my purchases (except for fiber) but I will properly document tomorrow. And yes, that is me in the front row in the Kauni picture the Yarn Harlot had on her blog yesterday.

All in all Madrona was great. What a change from last year where I only knew Angela and Holly and not really enough to hang out with them. This year, I had so many people that I knew through friends, ravelry, email groups and shop customers/students. I also was able to get to know some of the other vendors better too (I worked part of the time I was down there) particularly Sheila Ernst, Ruth and Virginia Bowen of Seattle Yarn, Sandy from knit/purl, Tina from Blue Moon and Klaus from Crown Mountain.

Today is my 1 year blogiversary, so I think I'll be coming up with some sort of something....stay tuned to either tomorrow or Friday. I started this one year ago today at the urging of a really good friend (Hi Amy!) and it's been fun. Sometimes a bit stressful because I tend to feel guilty that I don't post enough, but all in all good.

Okay, gotta run - Ruth Sorenson is teaching a class all day at the shop and I'm facilitating it. Tables to move, scones to bake, you know the drill.

Have a wonderful day!
Posted by That's my middle name at 8:00 AM 2 comments: Links to this post 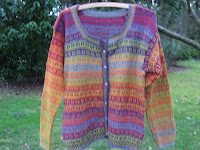 My Kauni is finally done. Guess I can go to Madrona after all! Just kidding - of course I would have gone, but I really wanted this sweater done. I started the sweater last July (July 28?) and knit the body up to the shoulders by August 25th. It then marinated in it's bag for a few months, working on it every so often. I finally decided it had to be done by Madrona, and pulled it out to finish it on January 1st. Actual finish date was 1/31/2008. I really like the buttons I used - I found them at Pacific Fabrics at Northgate for any locals - they are LaMode brand, style 24656 5/8".

Here's what I had left after all was said and done. Now, I will be reknitting the side of the button band with the buttonholes - what a nightmare! - but not until after Madrona. I tried and tried to get the count just right to pick up a goodly amount of stitches, and then space 7 buttonholes. I thought I had it all good and went on my merry way. I had even put a line of pins on our carpet to try and space them exactly right. When I was done, I realized that what I was thinking was the neck edge was really the bottom edge. Poo. I'll cut it off in a few weeks and rework this band. I still need to block this too - I only steam blocked it for the pictures, but I'm waiting for my new wooly board to get here first. 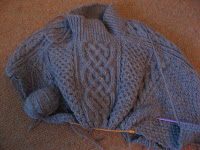 So, what's next now that it's officially February? These three projects (and of course, really there's more). On the left is the aran pullover from Two Sticks and a String that has been in a ziploc bag and on needles since 2004. I had actually made this once before, but in a size medium and out of merino wool. Why a second one? 1) the size M was 50" circumference - way too big and 2) my wool was very, very pilly. It ended up going to Value Village. I bought this heavy worsted perendale wool from someone - don't really remember who - and it took about 6 months for her to get it to me. Yikes. Bad internet buying experience. Anyway, I readdressed the project at hand today to figure out where I had left off. I was able to get a bit of the first sleeve going and hope to finish said sleeve this weekend. I'll just have to do one more sleeve, 15" of the body and it'll be done. Prognosis for this getting done this month is very good. 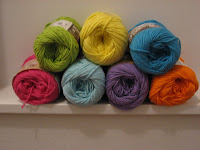 Second up on the needles are these balls of Sugar 'n Cream. I bought these last summer on a lark - at work we eat our lunch at the back table and face this one wall of yarn. For a few days in a row, I had noticed all these really cute bright colors of this yarn all lined up in the cubby. I counted. Seven of those really bright colors. Shoot - seven days in a week. Wouldn't they make great washcloths - one for everyday of the week for a certain daughter? Yep - I got them with the idea of adjusting the patterns for the washcloths seen in Knitters Stash for worsted weight instead of sportweight. These will be for Sara's birthday on March 17th. I know she'll love them. 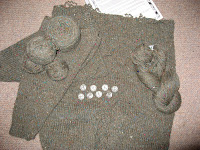 Last but not least on the needles for this month is the Peace Fleece Everyday Cardigan. I'll talk more about that one in another post - can't tell all my thoughts today or I won't have anything to talk about!

I think the following will be the last of the Christmas pictures/postings for this year/season. 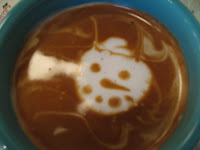 I have great friends - you guys already know this - but Amy, Naomi and I met at Trophy Cupcakes the Friday before Christmas to exchange gifts. The picture above is of the snowman that the barista made on top of my latte. Isn't it cute? I also had a peppermint chocolate cupcake, or rather part of one - they are so sweet that I can't usually eat the whole thing without a major sugar rush. Anyway, Amy gave me a great sock bag out of Amy Butler fabrics that her mom has been making. These bags are so great. There is a cute clip to attach to a belt loop and the yarn guide on the inside of the bag closes by snaps so you can take your project out unlike other bags. So, so cute! Keep checking Amy's blog - her mom has been making more and you need to get one! She also gave me a cute tape measure and some really fun kleenex. And a mitered square stitch marker! Thank you so much again, Amy! (Note: I love this bag so much that I actually bought a second one!) 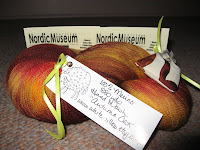 From Naomi I received some beautiful laceweight yarn from whitewillow in the Autumn Oak colorway. 100% merino and 880 yards. I'll be looking through the Victorian Lace Today book for something that will go well with this beautiful yarn. There was also a stitch marker and sachet attached to the yarn, and two tickets to visit the Nordic Museum. I've never been to this Museum, so I'm looking forward to going with her sometime soon! Last but not least, I need to pay homage to Junior the tree. What is now grass in this picture had been a perennial flower bed last summer. A few years ago I found this little fir tree seedling in the bed and decided to let it grow. I groomed it and pruned it really nice this summer with the plans that it would be Christmas tree for our kitchen. In the meantime, we planned the firepit (see the concrete squares) and plans to change the shape of the bed. It was strongly suggested that it come out at that time. This all took place in September and October, and it really needed to be removed so we could plant grass, but Doug was nice and let junior stay until it was time to cut it/him? in December. It was a nice tree while it lasted!

Posted by That's my middle name at 4:33 PM 4 comments: Links to this post